That Vegan Face Article: Snake oil at its most refined 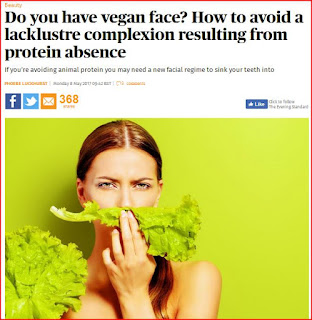 There's so much wrong in the mainstream media's reaction to the rise in veganism, but this month's award for vicious, malicious and downright ridiculous has to go to The Evening Standard for “That Vegan Face Article”.

Freelance lifestyle writer Phoebe Luckhurst has penned such articles as Meet London's New Generation of Conservative MPs and What your Facebook Profile Picture Actually Says About You. She could have told the features editor to fuck right off, but instead she put her name to what will elicit a guaranteed belly laugh from future generations – That Vegan Face Article.

“Do you have vegan face?” the headline asks, “How to avoid a lacklustre complexion resulting from protein absence.”

And if that's not enough, those people crankish enough to omit slaughterhouse produce from the dining table now face another barrier to functioning in a normal world – vegan face. “Simply, vegan face is a name for a slack, wasted look that is caused by an absence of protein in your diet,” reports Cambridge graduate Phoebe. “The skin is dry, sallow and flaky. Protein literally props up the face: it makes it look plump (in a good way) and fresh-faced and wakeful.”

As the jets of steam coming out of their ears give outraged thinking people a free facial, Phoebe assures us the vegan face is: “Rooted in science: dermatologists report that the rise of veganism is causing an according rise in what they are calling 'vegan face'.”

Step forward Inge Theron, founder of Face Gym. “We noticed a lack of elasticity,” she observes, which the company claims to have cured with a specially-designed facial treatment. This involves selling you supplements (£610.00 a box on the company's website) and having a go on a massage contraption, a laser contraption and a radio frequency contraption. The company will also flog you a face oil, rather than the traditional non-vegan snake oil, which at one time was sold to ill-educated and gullible people in the wild west. And the Face Gym will proffer any advice on diet, supplements and nutrition you didn't already know or got for free by reading or asking other people.

Talking of getting stuff for free, one-time beauty writer Inge seems quite adept at landing herself free write-ups in the papers – the Daily Mail gave her a similar acreage when she launched her Chelsea-based company in 2014.

“The effects of veganism are reversible,” Inge reassures, “if you fuel your body with rich, plant-based protein, fermented plant and pre- and pro-skin biotics and look at collagen supplements.”

The detrimental effects of capitalism can also be reversed. Through a good balanced diet, an enquiring mind and supplementary self-education.

They smear food on each other's faces, rather than eating it

Face Gym's advice to separate you from your money is supported by Chelsea facialist Nataliya Robinson, whose treatment Phoebe also recommends. I'm guessing she got a free trip there to try Nataliya's “vegan peel” method (advertised cost on Nataliya's website: £160.00), which sounds like she wiped a smoothie of blueberry, orange and lemon over her mush, before wiping it all off again. Hasn't put Phoebe off. But be warned, The Vegan Facial is just one corner of Nataliya's omnivorous palette – her treatments also include smearing honey on your face (£150.00) or caviar (£300,00). Not vegan.

What do vegans eat instead of protein?

If you're scared you might not be eating any protein at all, Phoebe recommends you “try the holy trinity of tofu, quinoa, beans” and improve your looks with “strong exfoliaters to slough off all the dry skin cells”.

Inge adds her two penn'orth: try eating avocado, nuts, lentils and split peas. Hey, why not smear them on your face and wipe them off again! What harm can that do to a moneyed-and-slightly-neurotic West London resident? Thanks! My face feels as light as my wallet.

The article declined to comment on the effect of protein/fat-rich meat and dairy diets have on the complexion. We can only assume burgers, cheese, milkshakes and sausage rolls make skin something akin to finely-crafted porcelain.

So remember vegans, eat stuff like the stuff you probably eat already .... or your face will look like a bag of shite.
Posted by cubesville at 10:55 No comments: 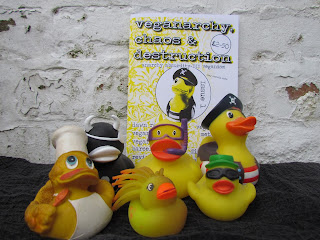 The cast from the all-new Veganarchy, Chaos & Destruction gather for an exclusive photoshoot in front of the UK's most unusual veganzine.

In case you missed its launch, here's the bluurb and BigCartel address:

Get it here
Posted by cubesville at 05:53 No comments: 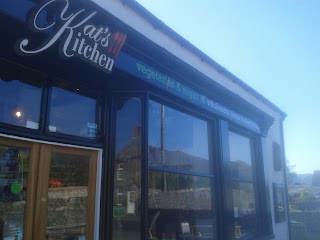 Nothing so good as finding a great vegan place while you're on holiday. Kat's Kitchen in Keswick rocks – it's got a great menu (although I went for the no-brainer all-day vegan fry-up). And it's right opposite the Pencil Museum (made famous by the film Sightseers).

Oh, and Castlerigg stone circle isn't a million miles away too. Keswick rocks bigtime.
Posted by cubesville at 05:43 No comments:

Email ThisBlogThis!Share to TwitterShare to FacebookShare to Pinterest
Labels: reviews 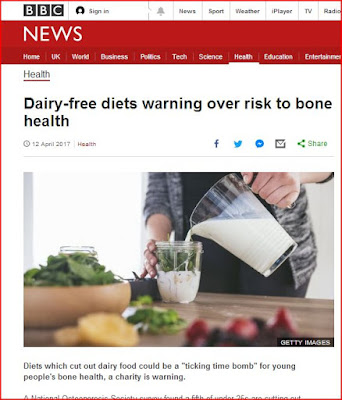 Under-siege food giants like McDonalds and Greggs are piggybacking health advice to deter young people from choosing a vegan lifestyle.

Disguised as a respectable charity, the British Nutrition Foundation is using tired arguments against veganism to push the interests of big business over healthy, compassionate lifestyles.

There was something decidedly fishy about last week's news story on the BBC, whose headline read: “Dairy-free diets warning over risk to bone health.” Could it have been the alarmist strap-line that dairy-free diets were a “ticking time bomb for young people's bone health”? Enough to make any parent sick with worry over their kid's decision to go vegan.

The advice, the BBC claimed, came from the National Osteoporosis Society (NOS). The BBC claimed the society was “concerned that many young people were putting their health at risk by following eating fads”. Strong language for a health advisor?

The NOS's original press release used no such language. It was pretty generic advice on families discussing nutrition with their kids. The society does back dairy as a major source of calcium, but lists it alongside green vegetables, nuts and seeds. It pretty much sits on the fence.

The BBC's article consists of three stories Sellotaped together – a beefed-up version of the NOS's advice; a Food Standards Agency survey that found half of 16 to 24-year-olds said they were intolerant to dairy, but only half of these were diagnosed intolerant. And then a comment from the British Nutrition Foundation: “While it's not necessarily dangerous to cut out dairy from your diet, it's important to ensure you get calcium from other sources.” It cites bread, cereal, canned fish, nuts, seeds, etc.

Who are the British Nutrition Foundation?

So where did this news story originate? And why the alarmist language for what was originally a neutral piece of advice?

Was the BBC hi-jacked by a well-funded food lobby?

Let's go further than cutting out cruelty from our diets – let's cut out the processed food industry that seeks to stall compassionate and healthy lifestyle choices. They are responsible for bad diets, lazy nutrition and the deaths of millions upon millions of animals.

Processed food was a fad. Let's cut it out from our diets altogether.
Posted by cubesville at 03:51 No comments: 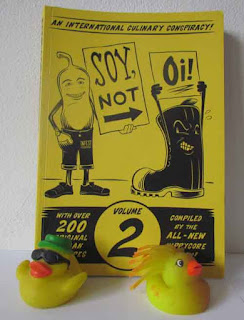 It's great when an idea takes on a life of its own. Soy not Oi! Vol 2 employs a cast of thousands over more than 300 pages in a loud, proud collective vegan punk voice. Hippycore Krew split the book into traditional sections, with Maximum Rocknroll-style columns on veganism. Its recipes always maintain simplicity, accessibility and achievability

Brilliant ideas pour from its pages – from braising carrots in tarragon and maple syrup, to Jerusalem artichoke gnocci, to pushing out the boat with a lime and coconut cheeezecake on a gingersnap crust. And it serves as a practical go-to guide for vegan cookery tips, like making your own seitan, egg replacers or pressing tofu.

Articles like Freegan in Brooklyn, canning tomatoes, or making your own deodorant and even anti-fungal footpowder certainly push the envelope. As does an exhaustive chapter on home brewing.

Volume 2 follows its predecessor by 25 years; the original span out of the 1980s anarchopunk movement when punk vegan cookbooks were a rarity – the Hippycore Krew used DIY means of production and the postal system to give vegan ideas a global reach.

But rather than being pragmatically vegan, Soy not Oi! Vol 2 often perches itself on the fence, allowing a shared space for vegans and non-vegans and to open fresh debate about cruelty-free life-style choices without taking a more pragmatic, and exclusive, approach. However, this middle ground is a a sign either an unwillingness to condemn or fear to fully commit.

That said, Soy not Oi! Vol 2 explodes with ideas and explores territory no other vegan cookbook has dared to venture. We await Volume 3 with baited breath....

Available through Active Distribution
Posted by cubesville at 00:00 No comments: 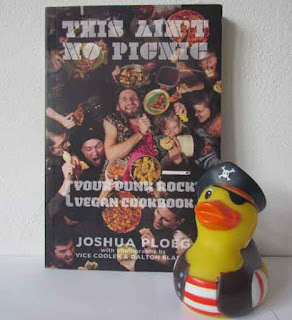 Joshua Ploeg – This Ain't No Picnic

If punk is about painting a big picture on a limited canvas, then this book is punk as fuck. Whether these recipes work for you or not (and I'm just suggesting here that a coffee pot curry or zippo lighter s'mores will not), This Ain't No Picnic is full to bursting with energy and enthusiasm – you can't help but get involved. “Punks get innovative when missing ingredients, gear or an oven” Joshua says, “now you can too.” This Ain't No Picnic doesn't present clear solutions, rather it's a riotous, chaotic, colourful roadtrip with a raucous, boundlessly positive travelling chef at the wheel.

For punks who have had to cook on the cheap, on the road or on mind-altering chemicals, this is jam packed with brilliant ideas. For example, Joshua has provided a hilarious chapter on cooking (quite literally) on the road: Alongside dashboard kale chips and soaked Thai noodles, the potentially lethal Engine Block Casserole comes with a warning – “Should take an hour or so driving around,” he says. “I don't mean tooting round town either. I mean a real drive... And if you fuck it up, well don't blame me because no-one should ever cook on their engine!”

Or how about the chapter on improvisation: Credit card chopping makes sense if you're putting together an Italian salad sandwich, and stovetop pizza is an efficient way of heating and cooking together. Ideas for a spinning out a bag of flour and little else is perfect sense for when the money isn't coming in. Joshua even devotes an entire chapter to dumpster ingredients. And why the fuck not?

Joshua gets a friend to introduce each chapter, and in true DIY spirit, each friend has a role in the punk community around him. And to emphasise the point, each chapter comes with a playlist, which ranges from mainstream classics to obscure local punk bands.

Whether you pick up This Ain't No Picnic for cookery tips, recipe ideas of just for its mad sense of fun, this book is a milestone in punk rock vegan cooking.

Posted by cubesville at 00:00 No comments:

The Vegan's Guide to People Arguing with Vegans

"I couldn't live on a vegan diet - I need something I don't have to chase around the plate."
Posted by cubesville at 00:00 No comments:

cubesville
Anarcho-absurdist fanzine gracing the bathrooms of global punks since 1987. Co-presenting Under the Pavement every week across South and Central Manchester.